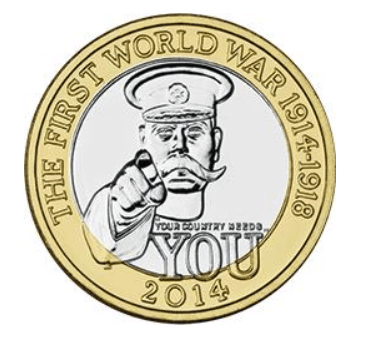 According to average sold prices on eBay in 2021, the First World War Outbreak £2 Coin sells for an average of £3.24 not including postage and packaging in circulated condition.

The full five-year set of coins commemorating the First World War would go on to include:

Let’s take an in-depth look into the coin, including how rare it actually is and what the design commemorates.

In addition to the standard £2 coin, there have been several variations of the reverse design to commemorate important people and events.

This special commemorative two pound coin was minted with 5,720,000 coins released into circulation.

There were also some brilliant uncirculated coins minted with a really nice presentation pack that included photographs and information that documented the beginning of the First World War. These were available to buy at the Royal Mint’s shop.

The Design Of The FWW £2 Coin

The first World War Outbreak £2 coin is part of the two pound coins that were designed to commemorate a special event or to honour someone. It is a bi-metallic coin consisting of two different alloys. The outer ring is a Nickel-Brass, and the inner circle is Cupronickel.

The two pound coin has also been minted in silver and gold as well as in special commemorative sets.

The £2 style was issued every year with several of them as a commemorative type to celebrate important people, anniversaries, or to point out parts of British history. The 2014 FWW Outbreak £2 Coin being part of the Technology type £2 only the reverse features a special image designated only to this specific commemorative coin release.

The reverse of the special commemorative 2014 FWW Outbreak two pound round coin features a design that was to commemorate the 100th anniversary of the Outbreak of the First World War.

The image, designed by John Bergdahl shows Lord Kitchener pointing his infamous finger and the words “YOUR COUNTRY NEEDS YOU”, which was derived from the war posters encouraging young men to enlist to fight for their country.

The initials JB are seen to the left of the date and under Lord Kitchener’s sleeve. These are the initials of the coin’s engraver artist.

Arcing above Lord Kitchener are the words THE FIRST WORLD WAR 1914-1918. Below him and centered on the bottom outside ring of the coin is the date the special commemorative coin was issued, 2014.

Around the milled edge is the inscription: THE LAMPS ARE GOING OUT ALL OVER EUROPE.

The obverse of the coin features the Fourth Portrait of Queen Elizabeth II that graced the coin with this specific portrait since coins went decimal with the two pound coin released in 1998 after being printed a year earlier in 1997. Her right-facing image appeared on the two pound coin from 1998 to 2015.

She is wearing the “Girls of Great Britain and Ireland” diamond tiara which was a wedding gift from Her Majesty’s grandmother, Queen Mary, in 1947. The initials IRB are present just beneath her portrait which stand for the artist Ian Rank-Broadley.

Surrounding her head all around the outer circle is her legendary ELIZABETH II DEI GRA REG FID DEF which translates from Latin to mean Elizabeth the Second, by the Grace of God, Queen, Defender of the Faith.

What Does The FWW Outbreak £2 Coin Represent?

July 28, 1914, was the outbreak of the First World War that would go on to involve several allied countries. It lasted a little more than four years and was noted as being the largest war in history up till that point.

The countries of Europe were divided into two coalitions that included the Allied Powers and the Central Powers. In an effort to unite and increase forces in preparation for what was about to unfold, the Prime Minister appointed Lord Kitchener the Secretary of State for War. Following this appointment, an iconic recruitment poster was designed.

The poster featured Lord Kitchener in military uniform and official British Field Marshal cap, pointing his finger and stating, “WANTS YOU”. Above his head was the big capital letters that read, BRITONS, and under his image and the quote were the words JOIN YOUR COUNTRY’S ARMY! GOD SAVE THE KING. Later, the Parliamentary Recruiting Committee would use the design in a similar poster using the words, ‘YOUR COUNTRY NEEDS YOU”. These are the words that the coin designer would use for the 2014 commemorative coin.

Where Can You Buy The FWW £2 Coin?

eBay is the first option if you are wanting to pick up a circulated version of the coin, just beware of people who are trying to sell so-called ‘error’ versions of the coin.

The Royal Mint has a great inventory of uncirculated coins, such as gold or silver proof, which you can find at their shop.