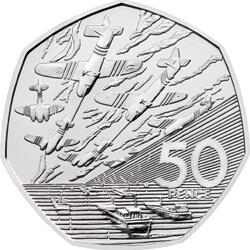 Released way back in 1994, the D-Day 50p has been an iconic coin ever since that year and is often confused for representing the Battle of Britain.

As it’s been around for so long, there’s no doubt you will have come across one of these coins before. But how much is the 1994 D-Day 50p coin worth today?

A 1994 D-Day 50p sells for an average of £2.75 in circulated condition on eBay (not including packaging), according to the most recent values in 2022.

Let’s take a look at the mintage and design of the coin to see why it sells for over five times face value.

The D-Day 50p coin was the only 50p coin to be minted in 1994. Three versions of the coin were produced – a standard cupro-nickel version that was put into general circulation, a silver proof version and a gold proof variant.

6.7 million of the cupronickel version were minted, but the two metal-proof versions had very limited releases. The silver proof coin has a mintage of 40,000 and just 1,877 of the gold proof coin were released for sale by the Royal Mint.

The was reissued in 2019 as part of the Royal mint’s 50 years of the 50p Military collection alongside 4 other 50p coins:

The reverse features a design by the sculptor John D. Mills. The coin is the second of five coins designed by Mills, who had been recently recognised as a Fellow of the Royal Society of Arts (FSRA) and is well-known for his work Monument to the Women of World War 2, in Whitehall, London.

Mills’ design features the Allied Invasion Force heading towards the beaches of Normandy by sea and air from Southern England. In the air are seven representations of the various bombers and 13,000 supporting aircraft that provided air cover for the amphibious landing.

These were a mixture of Douglas C-47 Skytrains (or Dakotas), American B-24s and B-17 Flying Fortresses, Spitfires, Hawker Tempests, Typhoons and Lancaster bombers. Underneath them, sailing on the English Channel are five Landing Craft, Vehicles and Personnel boats that carried men, munitions and material to Normandy on the day of the invasion. The inscription ‘50 PENCE’ is set off to the right of the design, in the middle of the coin.

All of the planes and boats are moving away from the front of the coin towards a far-left perspective point, with trailing clouds and linear waves adding a sense of drama to the scene.

Is The Coin Still Legal Tender?

As the D-Day 50p was introduced prior to 1997, it is an old-style 50p with a larger diameter and weight. This also means that it is no longer legal tender, as these older 50p coins were discontinued in 1994 making the D-Day 50p the last circulated 50p to be produced in this style.

Banks and Post Offices are quite likely to still accept them, however, but it would make more sense to sell one of them rather than trade it in at face value.

On 6th June 1944, the Allies launched the greatest amphibious invasion in history.

Codenamed ‘Operation Overlord’ but best known today as D-Day, the operation saw the invasion of occupied Europe by the combined Allied forces. As midnight fell on 6th June, the combined armies of the US, Britain and Canada, supported by the French resistance movement, had secured a 50-mile stretch of the French coast.

D Day heralded the beginning of the long Allied slog towards Berlin and, crucially, opened up a second front that would draw resources away from the bitter fighting in Russia.

By refocusing Hitler’s attention on France, the pressure on the Red Army was relieved.

Indeed the very threat of invasion impacted German strategy in a significant way, with divisions transferred from Russia and other theatres to France – already relieving the pressure on the Eastern Front.

Hitler expected the invasion force to cross the English Channel at its narrowest point, which further spread out German defences.

British commanders were haunted by the losses of World War One, so were initially keen to pursue a Mediterranean strategy first, involving campaigns in North Africa, Sicily and Italy, which America agreed to.

The failed Dieppe Raid in 1942 also highlighted the need for sufficient resources for any direct assault on Hitler’s ‘Atlantic Wall’, and the importance of gaining air superiority – lessons that were to prove invaluable on D-Day.

By midnight on 6 June, 132,000 Allied forces had landed in France, while more than 2 million were eventually shipped there in total, comprising a total of 39 divisions.

Just under a week later on 11 June, the Allies had fully secured the beaches and over 326,000 soldiers, more than 50,000 vehicles and around 100,000 tons of equipment had landed at Normandy, ready for the many battles that lay ahead on the European mainland.

The 1994 D-Day 50p is available to buy quite readily from eBay in circulated condition, with other examples including proof versions.

We usually recommend eBay as the best place to buy a circulated version, you just have to be careful to make sure what you’re buying is legitimate.

The gold-proof version is available to buy on the Royal Mint website.